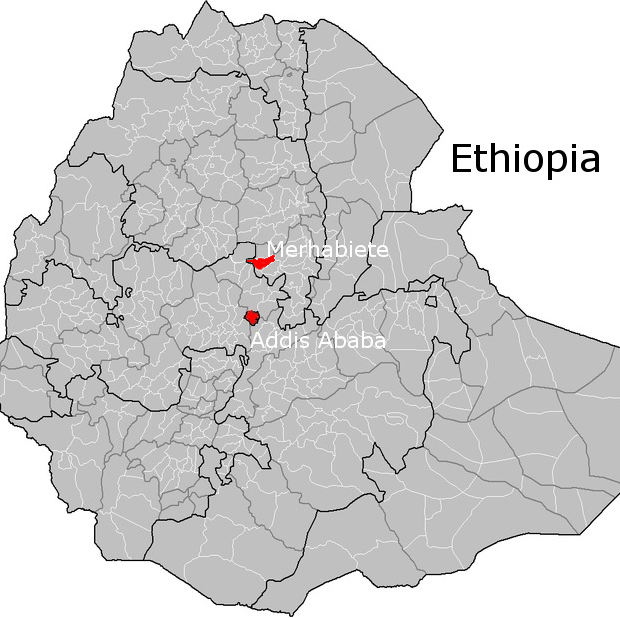 Where we are active

The city of  Alem Ketema, ca. 20.000 inhabitants, is the administrative center of the Woreda (District) Merhabiete, around  180 km north of the capital city Addis Ababa.  It lies at the edge of a plateau around 2300m above sea-level.  A, mostly unpaved, road connects Alem Ketema with the capital. The city has been connected to the Ethiopian power grid since 2013.   Very few private households have electricity.

The connection to  Alem Ketema came via  Städtepartnerschaft Vaterstetten - Alem Ketema (Partner City Project between Vaterstetten and Alem Ketema). Representatives of the "Ofenmacher" visited Alem Katema for the first time at the start of 2013.

Injera, a flatbread made from flour from the local wheat Teff, is an indispensible part of every meal in the northern half of Ethiopia. Injera is cooked on a round clay plate of around  65 cm diameter - the so-called Met'ad. Normally fresh injera is made two to three times a week.  More than half of the wood required for cooking each week is used for making injera.

A typical Ethiopian dish: Injera with vegetables and wot

In summer 2015 the stove was measured in the offices of the Gesellschaft für internationale Zusammenarbeit (GIZ) in Addis Ababa. Reductions in fire wood consumption were more than 50% as confirmed in both water boiling test and controlled cooking test (see report by GIZ).

After the initial visit at the start of 2013 and the design of a prototype stove in summer, the first "Ethiopian stoves" were built in Alem Katema in autumn of 2013.  Feedback from the community was valuable in helping improve the design. At the end of the development phase we had a stove design adapted to local needs. In the following months the first stoves had to prove themselves in daily use in private households and in a restaurant.

By March 2014 we were happy that the functionality and handling of the stoves were sufficient to allow the start of the first training for twenty local stove-makers. For two weeks the students received practical and theoretical training. The theory covered health-education, as well as correct operation and maintainence of the stoves. The aim of the practical training was to move people as quickly as possible from training rooms into real world locations. The training in the second week was in private-households which, as a reward, had a free stove by the end of the training.

The course was completed with a business training, to prepare the students for their future lives as small-business owners. This took place in the days following the original training and was rounded of with on site coaching.